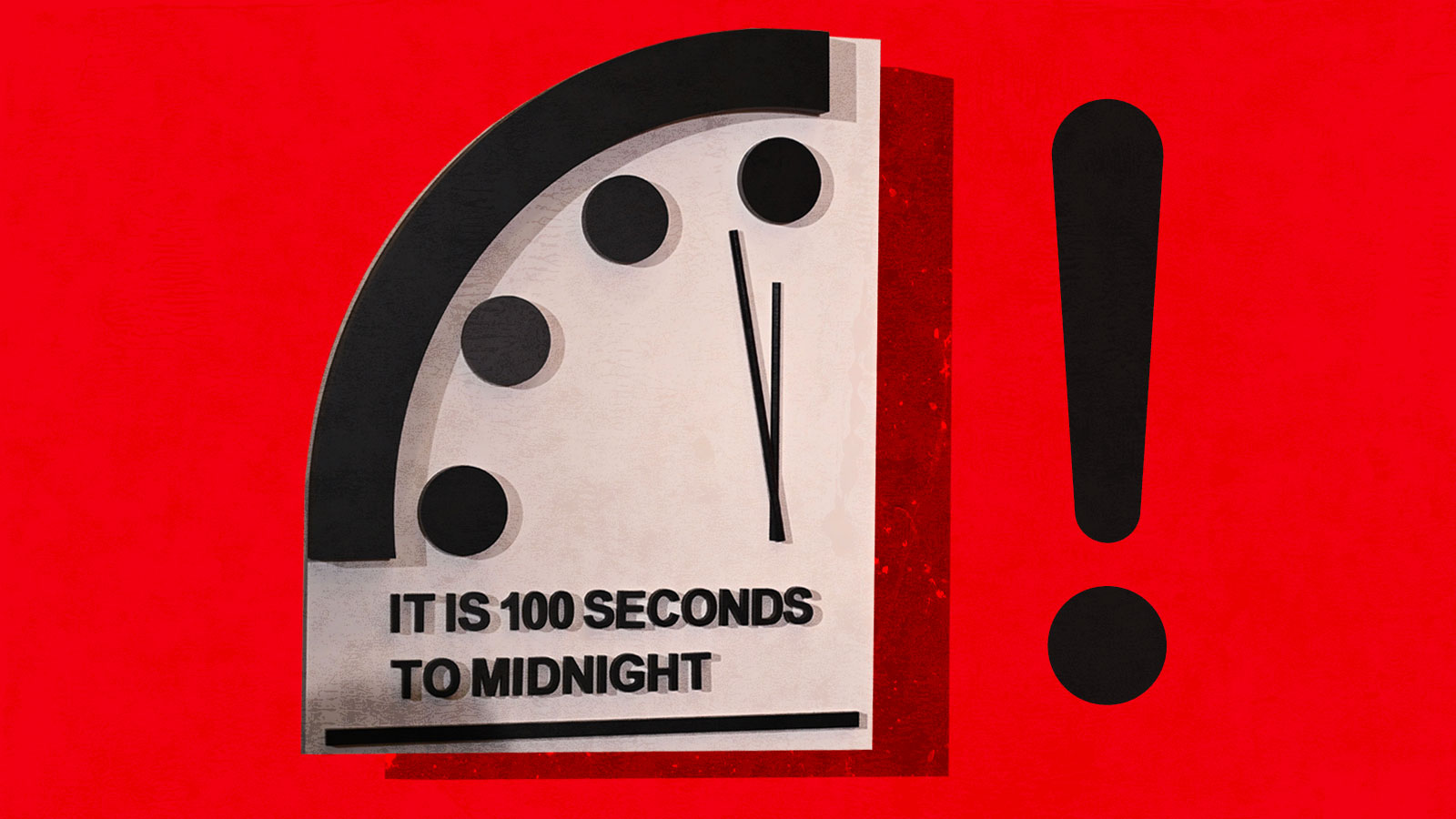 Get weekly climate politics updates from Grist
Subscribe to The First 100Wondering how close the world is to total annihilation, existential doom, and the collapse of life as we know it? Scientists have a new estimate for you.
The Bulletin of Atomic Scientists has been faithfully updating its signature “Doomsday Clock” since 1947. Every few years (or lately, every year), a group of scientists and security experts gets together to determine how close humanity is to “civilization-ending apocalypse.” They then set the “time” on the clock, as a way of letting the world know: The end, or “midnight,” is near.
This year, the Doomsday Clock is set to 100 seconds to midnight, tying last year as the most baleful warning the group has ever given. “As close to midnight as ever,” Rachel Bronson, president of the Bulletin of Atomic Scientists, said in a statement.

Get Grist in your inboxAlways free, always fresh
The First 100 Other choices
Ask your climate scientist if Grist is right for you. See our privacy policy

To be clear, the clock is not a literal clock. Instead, it’s a sort of a New York Times election needle for the planet, an anxiety-inducing egg timer that counts down the “minutes to midnight.” It has ticked back and forth from 17 minutes (phew) to less than 2 minutes (eek!) over the past several decades. The numbers don’t matter as much as what they are supposed to convey — that, with our nuclear weapons and carbon dioxide emissions and global pandemics and our increasingly dumb internet full of misinformation, the world is perilously close to catastrophe. (Climate change is a big reason why the group has moved the clock up in recent years.)
The problem is that there are a lot of these apocalyptic countdowns, and after a while, they all start to feel like background noise. The world was going to end in 2012, based on a popular misreading of the Mayan calendar — and then it didn’t. The year 2000 was going to cause large-scale electricity blackouts and computer failures in a Y2K apocalypse — and then it didn’t, thanks to the hard work of many computer programmers behind the scenes.
Climate activists have their own set of deadlines and apocalyptic predictions. In 2018, after the release of a landmark United Nations report on the overheating planet, Greta Thunberg began saying that humanity only had “12 years” to halt the destruction of global warming. There’s even a giant digital clock in Union Square counting down the hours, minutes, and seconds until we have to totally stop burning fossil fuels — or face the consequences.
The intentions here are good: Deadlines can motivate people to get things done quickly, as every college student (and journalist) knows. If you hear the world is ending in a little over a decade, you might be motivated to protest in the streets against human extinction, or skip school to stage a sit-in. But dangling the apocalypse in front of the public over and over comes with a downside. Research shows that most people can only handle so much fear, devastation, and “the world is ending!” messaging before they tune out. And then there’s the problem of what happens when the allegedly catastrophic moment actually arrives. When 2030 (the most popular “climate deadline”) rolls around, my guess is that we’ll still be spewing some carbon dioxide into the atmosphere — and, hopefully, human civilization will still be standing. At that point, will all of those “12 year” warnings feel like crying wolf?
The Doomsday Clock has a similar problem. As Lawrence Krauss, a former member of the Bulletin’s board of sponsors, wrote in the Wall Street Journal last year, it’s hard to take the clock seriously when it has remained frighteningly close to the apocalypse for … over 70 years. (Humanity’s best showing was in 1991, when the bulletin announced that the Cold War was over and set the clock a relaxing 17 minutes to midnight.) As we’ve learned during the pandemic, people have trouble focusing on catastrophes for more than even a few weeks at a time; asking them to fixate on the potential demise of civilization for decades is a tall order.
One of the weirdest things about the Doomsday Clock in 2021 is that, after a year in which most people felt closer to the apocalypse than ever before — remember the Blade Runner-esque orange skies over San Francisco, the rioters storming the U.S. Capitol building, and the deadly virus decimating the world? — the clock didn’t budge a single second. (The Bulletin explained its decision in a statement, noting that “COVID-19 will not obliterate civilization.” Comforting.)
Since the invention of nuclear weapons — and, in a way, ever since people started digging up and burning fossil fuels for energy — humanity has been living under a knife edge. Our way of life could be upended by an asteroid strike, by trigger-happy heads of state with nuclear arsenals, or devastating climate “tipping points” that jolt the weather into a new, strange normal. But we don’t need a clock to tell us that: It’s simply a part of being human in an overheating, interconnected world. All the clock does is make us feel anxious, then disappointed, then anxious again, and finally — if you’re like me — a little bit bored.

Sign up for The First 100 newsletter
Will Biden deliver on climate? Get weekly analysis of federal climate policy action in the first months of Biden’s term.